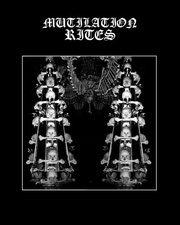 Prosthetic Records is proud to announce the signing of Brooklyn’s MUTILATION RITES. The filthy black metal band was conceived by Michael Dimmitt and Justin Ennis in January 2009 and after various incarnations, solidified with the addition of George Paul and Iain Deaderick. Members have done time in acts such as Tombs, Heuristic and Curendera. They cite influences including, but not limited to, Darkthrone, Discharge, Dissection and Weakling. The band commented on the signing and upcoming plans:

“After a quick east coast run we will begin recording our full-length debut for Prosthetic Records with Kevin Bernsten (TRIAC) at Developing Nations in Baltimore, MD. We couldn’t be more excited about our new relationship with Prosthetic Records. Expect us to be touring heavily beginning spring 2012.”