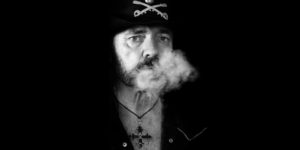 To celebrate Lemmy’s birthday (December 24th), the MOTÖRHEAD team are giving away a free download (here) of the entire set from December 23, 1996, recorded at the Biskuithalle in Bonn, Germany.

“The show opens with a blistering rendition of ‘Iron Fist’, rolling into a fluid, pounding ‘Stay Clean’. As the bass fades the band kicks you in the face with the sweet sounds of ‘Sex and Death’. This show ends the Overnight Sensation tour and finds the band firing on all cylinders, like a well-oiled machine. The destruction continues with an intimidating version of “Over Your Shoulder.” The new album of the day gets some representation with the anthem known as ‘Civil War’, a sonic attack to simulate a front line slaughter. One of Lemmy’s all time set list favorites, ‘Metropolis’ follows and is as tight as ever. With the guys warmed up for the night we hear guitarist Phil Campbell ask front desk manager Dave “Hobbs” Hilsden to turn it up before the rock ‘n roll journey that is, ‘I’m So Bad (Baby I Don’t Care)’ unleashes upon the crowd. ‘Burner’, the fastest song ever written is next on deck and probably melted any cockroaches in the venue. After this treat from the Bastards album we go old school with a meaty serving of the classic ‘The Chase is Better Than the Catch’. We then return to the title track of the new album, “Overnight Sensation”. Audible proof that the three piece lineup of Kilmister, Campbell and Dee was an unstoppable entity. ‘No Class’ follows and shows nothing but class and power as it pounds the audience down further into enlightenment! Next up, we receive a lesson in brutality as the epic ‘Sacrifice’ nearly rips off audience faces. We now travel back to the ‘Orgasmatron’ album for the beast that is the title track. This is a different arrangement for the release as it hides a slight edit of the song that resulted from side one of the cassette running out and being switched to side two for the remainder of the show. We then pay tribute to the most loyal of soldiers with a very merry rendition of “We Are The Road Crew”. Following this treat Lemmy gives a lesson in blues with the live favorite ‘You Better Run’. After this melodic jewel we get another sampling of the new material with the unapologetic “Broken”. The lesson in rock n’ roll continues with a trip down to Rio, ‘Going to Brazil’. ‘Killed By Death’, marches up next before the “Bomber” takes off to prepare the audience eardrums for the final assaults, which are the iconic ‘Ace of Spades’ and ‘Overkill’.