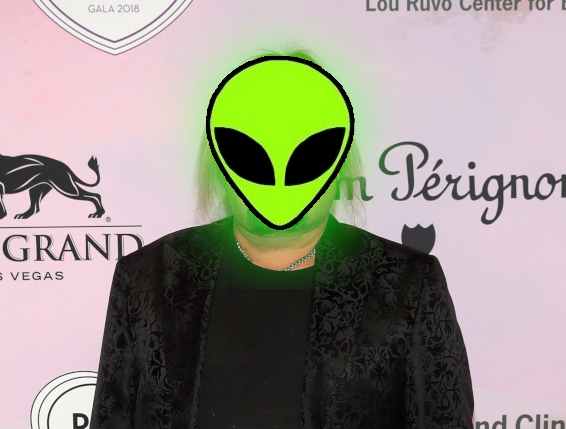 A wild new conspiracy theory has been launched about troubled MÖTLEY CRÜE vocalist, Vince Neil. The rotund singer has been battling a drastic change in his body shape over the past 5 years, and while many point to Neil’s issue with overeating as the main culprit, he has now outed himself during a recent concert as the victim of a secret alien takeover, believe it or not, wherein the old Vince got taken over by a parasitic shapeshifting alien race whose main objective is to rule the world and make humanity their slaves. It sounds like something straight out of a science fiction movie, right? Remember the classic film “Invasion of The Body Snatchers?” This movie was actually a documentary. Just like the John Carpenter film “They Live”, both depict a demonic alien race that can possess a human host.

This process is called ‘droning’ and has been exposed online by a truther named Donald Marshall.

Fan filmed footage of Neil’s solo concert from several days ago at Summerfest 2021 has been posted online. At the 2:22 mark is when something truly out of this world happens.

“The Vril proboscis connects with human eye and releases a foamy substance where the parasite injects itself into the human brain. The unfortunate human suffers temporary agony. Once the parasite is effectively in the brain, the human ceases to exist and the Vril is in full control of it’s host body.”

Check out the totally terrifying screenshot below. The footage was slowed down and paused when the strange anomaly happens.

Donald Marshall claims that “there is a secret that has been kept by members of the Illuminati for more than 70 years, a secret of such great importance, as to effect the lives of every man and woman on the face of the planet.”

Marshall states that his mission in life is “to share this secret with the world, so that all can know the truth and plan for the future.”

He also claims to have been held in an underground base and subjected to terrifying cloning experiments, and is the person who appears on a Megadeth album cover.

Look closely at the following screenshot, and you will clearly see that Vince Neil’s hand becomes discolored and elongated during his concert performance.

This is not the first time a famous rocker has been called a shapeshifter. The late great Elvis Presley is said to have been murdered by the Illuminati because he could no longer hold his human form.

This explains why Vince no longer seems like himself, in terms of his singing and physical appearance, because the Vince we all know and love is long dead, and has been taken over by an alien, who must eat young kids that have been abducted to help keep his humanoid appearance going. This is not a joke. Or is it?