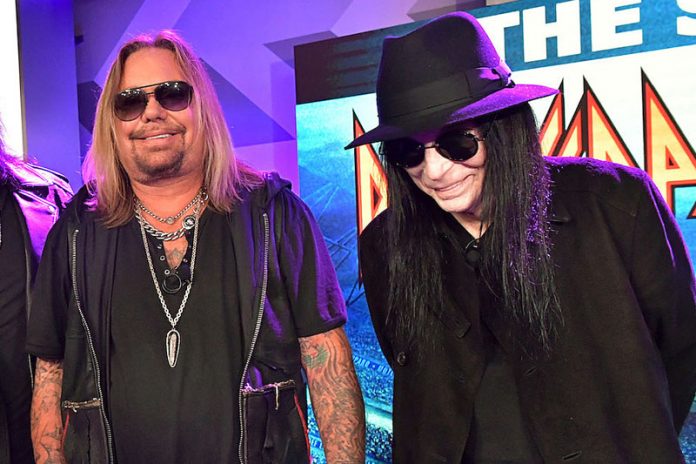 Legendary MÖTLEY CRÜE guitarist, Mick Mars, has purportedly seen enough of the train wreck that is Vince Neil. The six string icon is sick and tired of Vince and his “drunken” antics. The word coming out of the Crue’s camp today is that Mick has issued his own ultimatum to Neil, demanding that the singer seek professional help for his alcoholism or that the band will be forced to fire him again and bring back the group’s only other singer in 2022.

The sad reality is that this is the same exact situation that happened before when the Crue fired Vince in 1992 and hired the mostly unknown at the time John Corabi. Vince was more into race car driving and drinking heavily. He did not even care to show up to most band practices.

TMD broke the story that stated secret jam rehearsals were being held with Corabi and the other Crue members without Vince’s knowledge. It is being said the Crue has been developing a contingent plan while Vince continues his shocking decline. In light of what just happened with the troubled vocalist falling off the stage and breaking his ribs during a solo concert, from a business standpoint protecting the band’s best interests, along with Vince’s safety, and the safety of others, is what matters the most to Nikki Sixx, Mick Mars & Tommy Lee.

Vince would still keep his share from the band’s earnings from ticket sales and merchandise for the comeback tour, but a small percentage off the top would be agreed upon to give Corabi fair payment for saving their asses.

The fear now is that with the two months of needed recuperation time that Vince might sink deeper into depression and escalate his drinking to another level. Because the band has already twice postponed this comeback tour, they know that a third postponement spells death as this announcement would trigger a massive call for refunds from fans. All rock critics agree that Vince is simply not in good enough shape to perform at a massive stadium rock show, and with time running out, unfortunately, the original Crue vocalist looks to be on the outside looking in.

Former Crue limo driver, Al Bowman, went on the record about Vince Neil’s life threatening battle against the bottle, and he claimed during a recent interview that Vince is drinking himself to death.

MÖTLEY CRÜE‘s “The Stadium Tour” with DEF LEPPARD, POISON and JOAN JETT & THE BLACKHEARTS was originally scheduled to happen in the summer of 2020 but ended up being pushed back to 2021, and then to 2022.