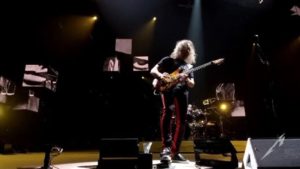 The clip below is multi-camera MetallicaTV footage of METALLICA playing “The Wait” live in Munich, Germany on April 26th at the Olympiahalle.

The band has checked in with the following update: “Munich! Thank you so much for a great night at Olympiahalle! Relive the show by pre-ordering a professionally mixed audio recording of the show now at Metallica.com or LiveMetallica.com.”

“Hardwired”
“Atlas, Rise!”
“Seek & Destroy”
“Holier Than Thou”
“Welcome Home (Sanitarium)”
“Now That We’re Dead”
“Confusion”
“For Whom the Bell Tolls”
“Halo on Fire”
“The Wait” (Killing Joke cover)
“Fuel”
“Moth Into Flame”
“Sad but True”
“One”
“Master of Puppets”
Encore
“Spit Out the Bone”
“Nothing Else Matters”
“Enter Sandman”

American quartet Metallica were one of the most influential heavy metal bands of the ’80s and ’90s, inspiring generations of rockers with their early thrash and later hard rock sounds before settling into their roles as a popular legacy act in the 2000s. Responsible for bringing the metal genre back to earth, the bandmates looked and talked like they were from the street, shunning the usual rock star games of metal musicians during the mid-’80s pop-metal renaissance. Metallica also expanded the limits of thrash, using speed and volume not for their own sake, but to enhance their intricately structured compositions. The release of 1983’s Kill ‘Em All marked the beginning of the legitimization of heavy metal’s underground, bringing new complexity and depth to thrash metal. With each album, the band’s playing and writing improved; James Hetfield developed a signature rhythm playing that matched his growl, while lead guitarist Kirk Hammett became one of the most copied guitarists in metal. To complete the package, Lars Ulrich’s thunderous (yet complex) drumming clicked in perfectly with Cliff Burton’s innovative bass playing.