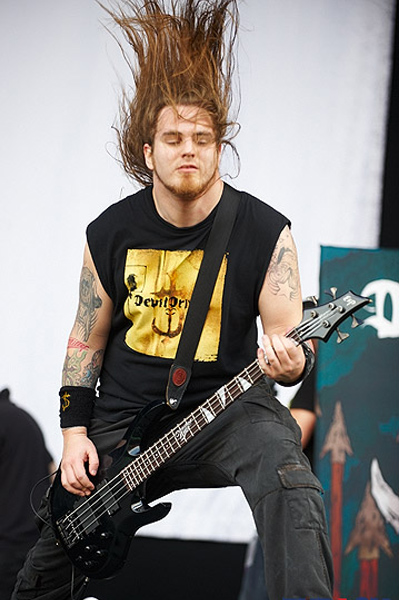 In light of the recent announcement that Jonathan Miller has rejoined DEVILDRIVER, TMD shares a classic interview with the bassist conducted by ROCKET.

DevilDriver is a groove metal band from Santa Barbara, California that was founded in 2002 by former Coal Chamber vocalist Dez Fafara. The act’s unique approach to songwriting, along with having a reputation for putting on the most explosive live performance in rock today, has solidified them, in many fans eyes, as one of the best heavy metal bands in the world. They have just finished production on their fourth studio album entitled “Pray For Villains”, slated for release via Roadrunner Records in the summer of ’09.

THE METAL DEN’s Randy “Rocket” Cody has conducted an exclusive interview with Jonathan Miller of DEVILDRIVER for TMD’s loyal and devoted following of DEN HEADZ worldwide! 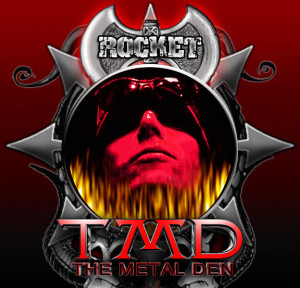 Rocket: Where were you born and raised?

Jon: I was born in Seattle, Washington and spent the first five years of my life in the Pacific Northwest, but my family moved to Boston, Massachusetts in 1985 and I was raised as an East Coast kid all the way through high school.

Jon: I have three older brothers and grew up with cats in the house all the time.

Rocket: What first drew you to playing music?

Jon: I remember living in Seattle and my mother would play “Uptown Girl” by Billy Joel on the stereo and I would jam guitar on a tennis racket.  That was my first memorable musical “moment” that I had.  I took piano lessons for 6 or 7 years and I think that helped develop my ear.  I remember being in 6th grade and getting really into Nirvana and Guns N’ Roses.

Rocket: When exactly did you first start playing the bass guitar?

Jon: I started playing bass guitar when I was 12 or 13.  My best friends Jeff and Kevin had formed a band in Lowell, MA called Tennenvang (even though there was no drummer) and we would just learn Metallica, Pantera, Iron Maiden, Sepultura and Slayer straight from the tablature books that you could buy at music stores and play them in our bedroom.

Rocket: Did you ever take any formal bass playing lessons?

Jon: I took a couple formal lessons, but I didn’t really enjoy learning the simple basic exercises.  I wanted to cut to the chase and learn “Disposable Heroes”, not 12 bar blues.  I was very impatient.

Rocket: Who are some of your biggest playing influences of past and present?

Jon: Growing up I was totally enthralled by Cliff Burton, Jason Newsted, and Alex Webster.  Presently, I think that Vortex from Dimmu Borgir is the man.  Peter from In Flames rules too.

Rocket: Those of us who play can always remember back to the cover songs you first learned when starting out on your musical instrument. It goes from really sucking to actually, over long periods of practice, becoming more in tune and in rhythm. What are some of those songs for you?

Rocket: DevilDriver actually started out as Deathride but had to make the change due to legal reasons.  When you guys came up with the DevilDriver name, and started to understand its meaning, do you think that helped inspire the band to be even more brutal as a music act? 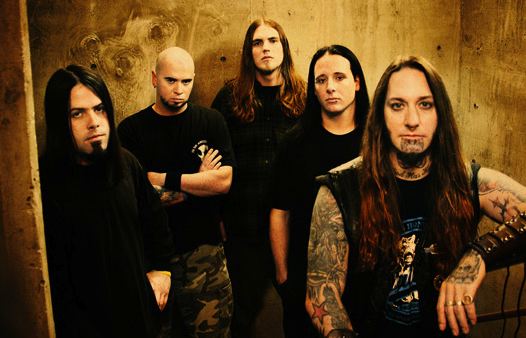 Jon: I don’t think we try and be as brutal as possible as a music act. I think we just try to write what makes sense to us as good songs and try to write what we would want to hear from a band if we weren’t musicians. One thing I like about songwriting is having a good hook.  I want to be able to hear something once and say to myself “Wow, that was great… I can’t wait until that part comes back again in the song”.  We just try to write heavy, listenable and tasteful.

Rocket: Do you think the name DevilDriver maybe has pushed you guys not just as musicians but also in your regular lives as well, perhaps to become the best person you can be too? I understand Dez has said in a recent interview that he no longer drinks really hard. How maybe has this band’s desire for greatness behind the name ultimately helped shape things for the better in your life?

Jon: Well, one thing is for sure… playing in this band has challenged me greatly for things in my touring life to not spill over into my personal life.  It is very easy for drugs and alcohol to fog a touring musician’s mental clarity.  Since my job doesn’t require me to be at a 9-5 job every day, it provides the opportunity of late night and even all-day partying… that eventually leads downhill for everybody, and one needs to learn to balance that out in a healthy way or simply eliminate it altogether.

Rocket: How did you initially start jamming with Dez Fafara?

Jon: I was playing in a local band in Santa Barbara at the time with Jeff, Mike and John Boecklin and we met Dez right at a crossroads where he was talking about leaving Coal Chamber.  He told us he wanted to go heavier so we said, “Hell yeah… let’s do it”.  The timing could not have been better.

Rocket: Were you a big fan of Coal Chamber when they were a band?

Jon: To tell you the truth, I never got into Coal Chamber. I was more into stuff like Vader and Suffocation… but I did know who they were, and I did know that there was a huge buzz on the band Coal Chamber.Rocket: What can you tell me about Dez the friend versus Dez the bandmate? Is it virtually the same guy or does he put on a game face both in the studio and on stage?

Jon: Dez is a great friend, and we share a special relationship because we understand each other.  When Dez and I are at home he wears Hawaiian shirts and board shorts and I wear pajamas most of the day but when we perform, we put on the battle cuffs, and it is “Go-Time”!

Rocket: What kind of bass guitars are you currently playing live and in the studio?

Jon: I am a proud player of ESP guitars and basses.

Rocket: What kind of amp rigs?

Jon: I recently just got an endorsement with Ashdown. They are as good as it gets for bass players.

Rocket: What’s your opinion of playing the bass with your fingers versus using a pick?

Jon: Sometimes the style of the song calls for different bass playing styles.  When the song has heavy attack and machine gun rhythms a pick will usually sound better.  When there is more feel in the song and you want to play in the pocket, I would go for finger style playing.  I always record with a pick.  You will simply get more out of your tone.

Rocket: With all the shows you have played over the years now, what are some of those that remain your personal crowning achievement, in terms of the band putting on its best performance and having the best crowd reaction?

Jon: Playing in Moscow was like a dream.  Playing in Mexico City and Santiago, Chile was fucking unreal.  Australia is always top notch and the UK and Germany always bring some of the best shows.  We are playing the mainstage at Download this summer.  I am sure that will be our crowning achievement so far.

Rocket: Let’s talk about the new DevilDriver album “Pray For Villains” which is set for a July 14th release via RoadRunner records. All the most devoted DevilDriver fans expect more and more from this band with each new album, so I know this must only be getting harder for you guys to musically outdo what you’ve done before, right? How did you approach this fresh collection of songs?

Jon: Well, to be honest with you, Rocket, we approached this record the same way we have approached our previous records… except that now, we are better songwriters, and we are writing better and more interesting material.  You will definitely hear the biggest difference in Dez’s vocals on “Pray For Villains”.  He is evolving as a singer and the listener will definitely notice the difference by the second or third track on the record once it is done playing.  “Pray For Villains” is easily the band’s best performance captured on an album and I am very interested to hear feedback from people as soon as possible!

Rocket: Who produced it and where was it recorded?

Jon: Logan Mader recorded and produced “Pray For Villains” at Edge of the Earth Studios in Los Angeles, CA in January of 2009.

Rocket: You and Dez have both gone on the record to say that DevilDriver’s music is misinterpreted as being evil… when it’s really more about “uplifting people”, right?

Jon: DevilDriver is all about spreading positive energy. If anyone thinks that sending negative messages to people is a good idea then they should really reevaluate their life.  I believe that people are given the chance to do great, powerful and beautiful things while they are on this earth, harnessing bad energy is a waste of your time and mine. Go ride a fucking dolphin.  See if that puts a smile on your face.  I did it twice. It will change your life.

Rocket: I like to have fun with this next question. What’s the most embarrassing thing you’ve ever had happen to yourself while performing live?

Jon: On the first tour DD ever did with Superjoint Ritual in Oct 2003, I fell through the floorboards on stage in Cedar Rapids, Iowa.

Rocket: What’s the one piece of advice you’d give to a kid nowadays starting out on his or her instrument with big hopes of achieving the “rock and roll” dream?

Jon: Find a group of dudes or chicks who are lifers and just stick to it.  The reason why most bands don’t make it out alive is because they give up too quickly.  I had to put almost 10 years in before anything happened for me.

Rocket: Where do you see yourself in ten years from now?

Jon: 10 years from now I would like to be sitting poolside at my ocean view ranch in Santa Barbara eating a burrito with James Hetfield.