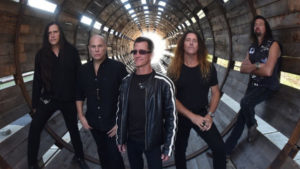 METAL CHURCH has posted a new video for the song “Reset”, taken from the their latest album “XI”, which was released on March 25, 2016 via Rat Pak Records. Produced by guitarist Kurdt Vanderhoof and co-produced by Chris “The Wizard” Collier, the band’s eleventh studio release marked the return of singer Mike Howe.

Check it out below.

Formed in Seattle in 1982, Metal Church consisted of vocalist David Wayne, guitarists Kurdt Vanderhoof and Craig Wells, bassist Duke Erickson, and drummer Kirk Arrington. Their 1985 self-titled debut album, recorded when the thrash/speed metal genre was still evolving, made a huge splash on the scene, as did its similar follow-up, The Dark. However, the band really hit its stride when Wayne left and was replaced by Mike Howe on 1989’s Blessing in Disguise; Vanderhoof left after the album due to his dislike of touring and was replaced by Metallica guitar tech John Marshall. Vanderhoof remained the group’s designated composer on 1991’s The Human Factor, possibly the band’s most socially conscious album. However, the advent of alternative rock and problems with their record label contributed to a loss of direction on 1993’s Hanging in the Balance, and Metal Church ended up disbanding.

In 1999, the group’s original lineup — Wayne, Vanderhoof, Wells, Erickson, and Arrington — reunited and released the album Masterpeace. The ensuing years saw the group undergoing numerous lineup changes and assorted members tending to other projects. In 2004, the band issued their seventh full-length LP, the critically acclaimed Weight of the World, which marked the debut of new vocalist Ronny Munroe. Tragically, former vocalist David Wayne died the following year from complications resulting from a car accident.