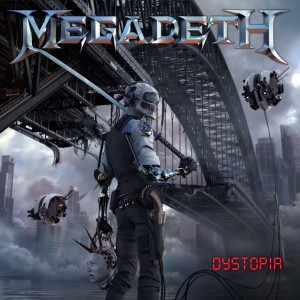 MEGADETH secures the Billboard 200 chart’s highest debut this week, as the band’s new album, Dystopia, bows at #3 with 49,000 units (48,000 in pure album sales). It’s the highest charting album for the act since 1992’s Countdown To Extinction debuted and peaked at #2 on the chart dated August 1st of that year. The new album also logs the group’s best sales week since 2007, when United Abominations launched with 54,000 sold at #8.

Featuring 11 brand new tracks, Dystopia (Universal Music Enterprises /Tradecraft / T-Boy Records) is available on CD, LP, and digitally. Additionally, a special edition featuring a groundbreaking Virtual Reality experience in which fans will be able to purchase the new album, a CEEK Virtual Reality headset with instructions, and a download code to access and unlock exclusive content to begin their VR Experience. All configurations can be purchased through physical and online partners now.

With musical architect and band visionary Dave Mustaine at the helm, Dystopia was recorded in Nashville, TN, and mixed by Josh Wilbur (Lamb Of God, Gojira, Avenged Sevenfold). The rest of the Megadeth lineup is comprised of new member Kiko Loureiro (formerly of Angra), David Ellefson on bass, and drummer Chris Adler, who took time away from Lamb Of God to record Dystopia. The result marks a true return to form, adding new blood and injecting a new burst of creative energy into the new album.