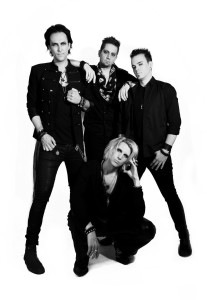 MALICE IN WONDERLAND has decided to call it quits. Here is the official statement: “After being in Malice In Wonderland half my life I have decided to put Malice In Wonderland to rest” says singer and founder Chris Wicked. “Earlier this summer Tracy (guitarist) informed me that he wanted a break from the music industry to focus on other stuff. I don’t want to bring in a new guitarist in the band at this point and therefor feel it is time to end this incredibly journey. It’s been 10 years since we released our debut CD, it’s been a hell of a ride and we all agree it’s a good time to close the book. Two farewell shows (Helsinki & Bergen) will be held before we take the final bow.

We would like to thank everyone who has supported us and stood by us over the years. Friends and family, business partners and bands we’ve toured and played with. But most of all we would like to thank our dedicated and beautiful fans around the world, you know who you are and we love you.

Malice In Wonderland released two ep’s in the nineties before Chris Wicked went from keyboard player to frontman. Since then they have released 2 albums and several EP’s and singles. Their latest album “The Royal Brigade” was released December 2013. Malice In Wonderland will play two farewell shows before it’s over, MeriRock in Finland, September 12 and a final hometown show at Garage, October 9.