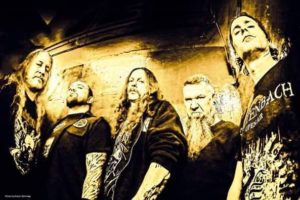 MALEVOLENT CREATION guitarist Phil Fasciana recently checked in with an update regarding their new lineup (Fasciana is the only remaining longtime member) and their plans for their thirteenth studio album. Here’s what he had to say of that:

“So this is the current situation considering Malevolent Creation and the new line up for recording our 13th album and shows to follow. After receiving so many great videos and songs from singers wanting to take over the vocal position after the departure of original vocalist Bret Hoffmann, I finally have found the right man for the job.

I received a few songs from Lee Wollenschlaeger and his solo project Imperial Empire and was so impressed that after a lot of conversations and hearing his own compositions and demo’s of him singing M.C. songs i could not deny his talent. The demo song posted below is one of his songs that I really liked and told him we could work with his song for the next MC album and let people hear our new vocalist and his talent.

He is also playing guitar in the band which makes us now a 4 piece and to prove my commitment to him that he is now the vocalist I posted this demo song that he wrote and that is being re recorded as we speak so he can re write the lyrics and i can lay down a couple guitar solos for this song.

The new line up is: