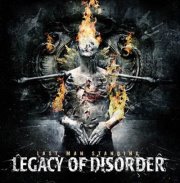 New Zealand heavy metal export LEGACY OF DISORDER is pleased to announce the North American release of their new album, Last Man Standing, with Black Orchard Music on September 18, 2012. The band builds on their signature sound which largely resembles the power metal that such renowned U.S. bands like Pantera perfected and popularized. As they did with their 2008 demo, the band tapped Dallas-based producer Sterling Winfield for Last Man Standing, who has worked in the past with Pantera, Damageplan, and Hellyeah.

As one would figure from the explosiveness of their recordings thus far, LEGACY OF DISORDER is one ferocious live beast when they hit the stage. In celebration of the release of their new album, the band will join GWAR, DevilDriver and Cancer Bats on tour this fall. The tour kicks off on Friday, October 12th in Philadelphia, PA and hits several major U.S. cities, coming to a close in its kick-off state on Monday, November 26th in Pittsburgh, PA.

“We can’t wait to get back on the road. This upcoming tour will be killer! It’s an honour to be back on tour with the mighty GWAR,” states guitarist Rana Freilich. “The line-up is brilliant with DevilDriver and Cancer Bats joining in on the festivities. The timing couldn’t be better with our new album Last Man Standing being released September 18th, followed up with such a badass tour. The band is pumped and can’t wait to throw down the new material on stage. There will be no holds barred.”

It is only a matter of time until LEGACY OF DISORDER takes their rightful spot alongside the top modern day metal acts. “We think our style fits in well with today’s metal scene,” explains lead singer James Robinson. “We have elements of a wide range of metal – all into one robust unit. LEGACY OF DISORDER shows in a lot of ways the evolution of this genre, but with a unique sound that no one can replicate.”

See below for all current LEGACY OF DISORDER tour dates and stay tuned for more updates coming soon.