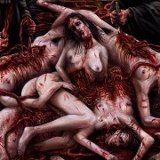 LACERATION have posted an advance track from its forthcoming album “Severing the Divine Iniquity,” which is due out in January on New Standard Elite Records. The track, “Spewing Venomous Supremacy,” is posted HERE. Laceration is a brutal one-man death metal band from the U.K., composed of the Scottish Hamish Maguire on everything except for the programmed drums. Currently, Laceration is offering its EP for free by visiting Facebook.

Laceration has also posted a few gigs it will be playing at below: