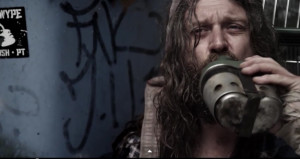 Dead Set is the impending new full-length from Australian thrash grind goliaths, KING PARROT. Tracked by Philip H. Anselmo and Michael Thompson with Steve Berrigan at the infamous Nodferatu’s Lair (Down, Eyehategod, Superjoint Ritual et al) in Louisiana, Dead Set is a ten-track, punk-infused masterwork of audio battery that wastes no time in blowing speakers and sheering the skin off faces upon the very first moment of pressing play.

As a precursor to its official detonation, set for May 19th in North America via Anselmo’s Housecore Records, today Vice’s music portal, Noisey, is pleased to premiere the startling new video for “Home Is Where The Gutter Is.” Directed by Dan Farmer and produced by Farmwalker Films and KING PARROT, the clip is a visual journey into the world of a self-inflicted homeless man who’s had it with societal scorn and prejudice for his chosen lifestyle.

“There’s many people in the world forced into homelessness,” expounds KING PARROT vocalist, Matt “Youngy” Young. “Then there is people who just choose to be homeless, and actually prefer to live that way. The lyrics and the video clip focus on this and that these people should be entitled to live whatever way they choose. I think it’s one of the biggest ‘fuck yous’ to society a person can give and I admire it. ‘Home Is Where The Gutter Is’ is a story of a homeless dude, just trying to get by on a daily basis. He gets sick of people trying to mess with him, and when it becomes too much he takes matters in to his own hands. It’s a pretty absurd and abstract message, but basically it just says, ‘shut the fuck up and let people live however they want.’ Most of society sucks and this is our salute to homeless dudes who don’t give a fuck and choose to live outside of the laws and expectations most people live by.”

Adds Noisey, “KING PARROT is like the John Woo of music videos. Past videos have explored the pains of dealing with a parking ticket inspector, an axe wielding maniac and bassist Slatts waking up in bed next to Pantera’s Phil Anselmo after a big night. Most follow the themes of vengeance and involve realistic (and unrealistic) levels of violence and a good dose of humor. Their latest video for ‘Home Is Where the Gutter Is,’ taken from their upcoming album Dead Set, follows a guy, who, already down on his luck, gets harassed by a suit, a cop and a drug dealer. Without giving too much away, vengeance comes in the form of some swift back alley throw downs, and urine.”

View “Home Is Where The Gutter Is” at THIS LOCATION.

A true leap forward from their debut, KING PARROT’s Dead Set exhibits a distinct maturity from a band who’s committed to the rigors of international touring, slaying audiences through Asia, North America, Europe and Australia on a regular basis. In an early impression of the record, PureGrainAudio offers, “Unstoppably relentless from the get-go, Dead Set is a ferocious album to listen to with the punk sneer of ‘Like A Rat’ sounding like, for want of a better description, Cancer Bats bastardizing the ’80s Bay Area thrash scene. Elsewhere Dead Set is just rammed full of stomping, grinding, raging thrash. None of that retro-thrash shit; this is just heads down, fuck-you thrashing insanity.” While The Metal Den commends, “ten brutally dark and rampaging cuts,” further gushing, “What I love is that the full fuckin’ throttle momentum does not slow down one bit whatsoever and the last batch of tracks – ‘Sick In The Head,’ ‘Punisher,’ and ‘Reject’ – will have you straight up cheering for these dudes… Any fan of punk and metal music will definitely want to add this one to their collection, because this group is fuckin’ bad ass.”

Dead Set will infiltrate North America on May 19th via Housecore Records.