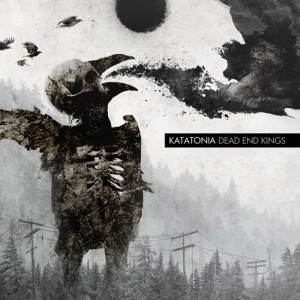 KATATONIA’s new album “Dead End Kings” has been given an August 28th release date (August 27th overseas) via Peaceville Records. Band vocalist Jonas Renkse had the following to say about it:

“Dead End Kings is about the corridors of our mind from where there is no return. Be a king or queen in your own right in these hallways, even at the dead end. Carry your burden with pride. That’s what we are doing, twenty years and counting. Kings, because we believe in what we are creating, in our own disturbing faith.”

“This album has doors revolving into many different genres of music but remain disguised within the Katatonia trademark. We have walked the fine line between attempting not to repeat ourselves but also not to distance us away from what people know and love.

We’re now ready to hand over the evidence and whatever the direction this has taken is now for you to decide. We’re confident the creativity and passion on this album is something that will be echoing even beyond the dead end.”

The albums cover art can be seen above, while songs due to appear on it include:

“The Parting”
“Hypnone”
“Undo You”
“The Racing Heart”
“Buildings”
“Leech”
“The One You Are Looking For Is Not Here” (feat. Silje Wergeland)
“First Prayer”
“Ambitions”
“Lethean”
“Dead Letters”