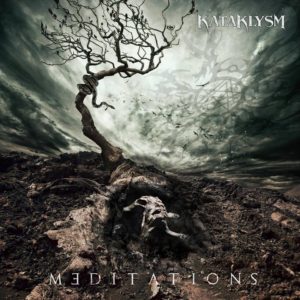 Canadian extreme metal veterans KATAKLYSM have unleashed the first new track from their forthcoming album, Meditations, which is slated for a June 1 release through Nuclear Blast. The new song is titled “Guillotine” and can be streamed HERE.

Vocalist Maurizio Iacono comments: “‘Guillotine’ is a powerful track that holds some of Kataklysm’s most important traits: fierce and fast riffing, melodic accents and groove laden power punches to the gut. We are focused and determined; dedicated to your worst enemy.”

For over a quarter century the monumental vessel of KATAKLYSM has overwhelmed the world with immense, powerful, death metal. Since their formation in 1991 they have uprooted influence in everything from ancient human history to the basic instincts surrounding mortal emotion. Part of what has kept Kataklysm not just surviving, but thriving for such a long period of time, is their incredible ability to explore the darkest chasms and most intricate paths of fleshly nature through music. With no end in sight, Kataklysm has culminated their most recent inspirations into their upcoming creation entitled: Meditations, to be released June 1st, 2018 via Nuclear Blast Records.

The building of the record began surrounding the recent 25 year milestone as the band found themselves in an era of re-creation. Kataklysm’s sound has always been incredibly diverse and attracted a wide variety of fans. Frontman Maurizio Iacono feels that the time has come to truly immerse the band in those origins of being naturally unique: “We’ve never really belonged to one thing, we were never really a follower of one style of music; we were a hybrid. It confused people a little bit, I think… we were an outsider band regarding that… not part of anything.” This philosophy has naturally lead to the beginning of an Outsider Movement, a “vast majority” of uniqueness amongst the masses of the metal world.