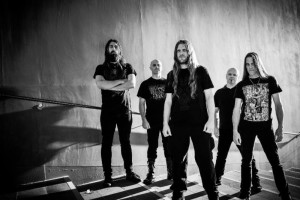 “The Empyrean Torment,” currently playing at indie music portal Stereogum, demonstrates the band’s monumental mastery of tension and texture, and can be streamed now at THIS LOCATION.

Issues Stereogum of the track, “INVERLOCH are a technically young band, but their roots run deep. Guitarist Matthew Scarajew and drummer Paul Mazziotta were pivotal members of Disembowelment, whose sole 1993 album Transcendence Into The Peripheral helped define the chiming, glacially-paced death metal mutation which eventually became funeral doom in the hands of acts like Evoken, Skepticism, and Esoteric. INVERLOCH practices this sepulchral discipline with mastery befitting their history on Distance | Collapsed, their first full-length effort under the new moniker. ‘The Empyrean Torment’ largely consists of a particularly vivid example of this approach – the band’s weight swings like a pendulum from beat to ponderous beat, accentuating a series of despondent melodies that sound like they’re wailing out of some vast cave. But INVERLOCH can crush at speed, too, and prove it at the song’s rabid conclusion.”

Distance | Collapsed will see a global release on CD, LP and digitally via Relapse Records on March 4th, 2016. Additionally, INVERLOCH have been confirmed for SWR Barroselas Metal Fest in Portugal this coming April, and is set to announce more festival/tour appearances soon.

Since the demise of Australia’s Disembowelment in 1993, a void has developed for the many fans of the band’s epic blend of slow atmospherics and blasting brutality. Few have succeeded in channeling this legacy, until Melbourne’s INVERLOCH — featuring half of the legendary Disembowelment — took the global stage in the late 2000s.