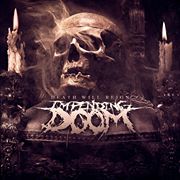 Southern California IMPENDING DOOM have announced their new LP called “Death Will Reign” to be due out November 5, 2013 via eOne Music. Recorded, Produced and Mixed by Will Putney at the Machine Shop, this is the band’s most ferocious material to date.

Impending Doom has crafted a stunning, deliberate and unrelenting collection with a sense of purpose, drive and continuity. “Death Will Reign” is the culmination of all that has come before, mining the bleak darkness and “scare” factor of last year’s “Baptized in Filth” and the dynamic fury of “There Will Be Violence” and “The Serpent Servant.”

All of those elements are injected with the return of the gritty rawness found within the unpolished grind of “Nailed. Dead. Risen,” Impending Doom’s squealing cult-classic debut that introduced the world to their unique combination of reverent worship and sick gore-core, dubbed Goreship.

“We wanted this album to sound very natural and unpolished,” explains longtime bassist David Sittig, a part of the lineup since before the first album’s release. “There’s no crazy digital stuff. There are no fake drums. We wanted it to have the feel of our first album with the songwriting from the last one. We’ve gotten better at song structures and so forth over the years, but we wanted to recapture that old-school vibe, too.”