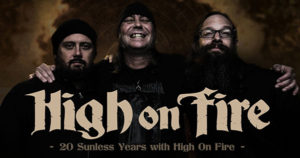 Oakland, California metal act HIGH ON FIRE has revealed that they’ll be celebrating their forthcoming 20th anniversary with some special shows dubbed “Twenty Sunless Years with High On Fire.” Here’s the official word:

“2018 marks High On Fire’s 20 year anniversary! To celebrate, we’re going to play some special anniversary shows entitled: ‘Twenty Sunless Years with High On Fire’. What do you want to hear? We will undoubtedly mix up some old and new, but we want to hear from the fans first!”

Released to mildly enthusiastic reviews, the album’s prospects suffered from label Man’s Ruin imminent bankruptcy, and it wasn’t until High on Fire landed on grindcore powerhouse Relapse Records for their second album, 2002’s devastating Surrounded by Thieves, that their abundant promise was rewarded. Extensive touring and an ever-increasing fan base followed, so that by the time they unleashed their third release, Blessed Black Wings, in early 2005 (introducing new bassist Joe Preston [ex-Thrones and Melvins]), High on Fire had earned their place as one of the most widely respected heavy metal outfits on the planet. Preston would be replaced by Jeff Matz, who would play on their 2007 release, Death Is This Communion.