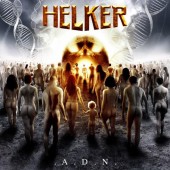 Argentina’s HELKER has signed a worldwide recording deal with AFM Records for new album “Somewhere In The Circle,” along with a management & booking deal with Level 10 Music & ITM Agency.

”Somewhere In The Circle” will be released on February 15th, 2013 through AFM and a video clip for the track “Wake Up” can be viewed below.

The new album includes 11 tracks and was produced & co-written by Mat Sinner and mixed by Achim Koehler at Indiscreet Audio studios. Tim ”Ripper” Owens (ex-Judas Priest) and Ralf Scheepers (Primal Fear) are featured as guests on the album, sharing the lead vocals with Diego Valdez on the epic “Begging For Forgiveness.” European audiences might know Diego Valdez from his appearance on the latest Tarja Live DVD/CD as guest vocalist on the song “Phantom Of The Opera.”

The band states: “We are excited and grateful to have the opportunity to work with AFM Records and Level 10 / ITM. This is the beginning of a new era full of new challenges and growth for HELKER! Thank you all!”