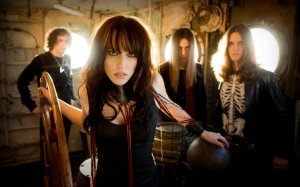 HALESTORM are currently wrapping up work on their third official studio album. They have posted Part 1 of a behind-the-scenes look at the making of the record HERE.

“Thinkin’ of all of you while listening to this new collection of songs. These new tunes are the badges of courage and empowerment you all have displayed in front of me. Every letter, every tweet, every show, you give me so much inspiration. This is the record you deserve.”

Ultimate-Guitar.com recently caught up with Hale for a career spanning interview, leading up to discussion about the band’s highly anticipated third record. An excerpt from the interview is available below:

UG: In 2011 you did the covers EP, ReAnimate. What was the reasoning behind that?

Lzzy: “There was a lot of, ‘Hey, this is fun. These are people we admire.’ We also were kind of using it as a tool. In the back of our minds there was something about playing somebody else’s songs where you end up discovering things you can maybe do or pull off that you didn’t know you could be doing just by working on your original songs.”

UG: That is a very astute observation.

Lzzy: “We were using it as a vehicle to kinda figure out where we wanted to go for the next record. It’s funny because that Skid Row song (‘Slave To The Grind’) was a direct influence on ‘Love Bites’ at that point because we loved how that came out and we’re like, ‘OK, we’ve never really experimented with this type of tempo before and hitting these certain notes.’ It’s interesting because you admire these songs and not until you try to go in there and take them apart and put them back together again, that you really understand how that song is put together and the moments it created. So yeah, it enabled us to move forward as songwriters while doing something really fun for the fans and fun for us. So it was kind of a win-win situation.”

UG: You also covered Lady Gaga’s “Bad Romance,” which was an interesting choice. Were you a Lady Gaga fan?

Lzzy: “(Much laughter) Definitely. Still my favorite record from her was her second one, The Fame Monster. In all honesty, I’m not quite sure if she topped that yet. Sorry, I’m being honest. But at the same time we loved the track and I was getting into it. I don’t think my guys were really into that but what we ended up doing to fill in the last two slots of that EP was we ended up putting a poll of 50 songs we all loved and it was that and some Katy Perry song. We kind of put in some oddballs just to shake it up and be like, ‘No one’s ever gonna pick that.’ But lo and behold after the poll and everybody voted on our website, the number one most requested song was Lady Gaga’s ‘Bad Romance’ and number two was ‘Sad But True’ by Metallica.”

Go to this location for the complete interview.