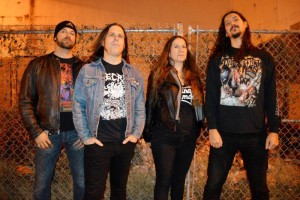 Channeling inspiration from one of death metal’s most revered, founding American acts, Death, into their own mangled interpretations, GRUESOME’s impending Savage Land debut is a delightfully horrid slab of late-’80s/early-’90s Florida-styled death metal created in homage to the late Chuck Schuldiner’s early masterworks. Uniting members of Exhumed, Possessed, Malevolent Creation, Derketa and more, with Savage Land, the collective is humbly determined to keep the sound and spirit of Death alive as sincerely and authentically as possible.

As a precursor to Savage Land’s official release next month via Relapse Records, today Noisey offers up namesake track “Gruesome” for communal enjoyment. Elaborates guitarist/vocalist Matt Harvey, “Okay, full confession: I always wanted to be in a band that had an eponymous song, like Iron Maiden or Angel Witch. It’s the kind of thing you really need to do on your first album, though. With ‘Gruesome,’ I felt like it was the right thing to do. It’s almost like a mission statement, and since, ‘sounds exactly like ’87-’91 Death’ doesn’t really roll off the tongue, I figured ‘Gruesome’ would work. It was one of the last songs we wrote for the album and it’s definitely one of my favorites. The lyrics are kind of a Cliff’s Notes on Scream Bloody Gore, from the burning bodies of ‘Infernal Death’ in the first verse to the zombie army of SBG’s title track in the last one. Anyway, I think it’s one of the better tunes we came up with and I hope you agree.”

Adds Noisey, “One spin of GRUESOME’s debut… and it’s immediately apparent where their main inspirations coming from. Given that two core members (guitarist/vocalist Matt Harvey from Exhumed and drummer Gus Rios of Malevolent Creation) met on the Death To All tribute tour and were drawn together by their mutual love for the first half of Evil Chuck’s catalog, and that the remaining pair — bassist Robin Mazen of Derketa and Possessed guitarist Daniel Gonzalez — are in possession of plenty of unfuckwithable vintage death metal cred of their own, there’s absolutely no surprise that Savage Land is a glorious throwback to the days of sweatpants, Morrisound, and Leprosy.”

Get “Gruesome” at THIS LOCATION.

Relapse Records will unleash Savage Land on CD and all digital outlets in North America on April 21st, preceded by its European release dates, April 17th in Germany, Benelux and Finland and April 20th in the UK and rest of the world.