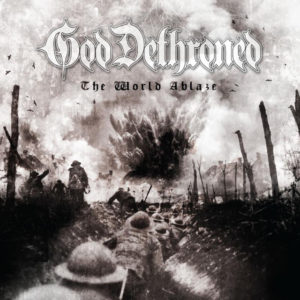 On May 5th, Dutch death metal act, GOD DETHRONED, will release their new album, The World Ablaze, worldwide via Metal Blade Records. A video for the first single, “On The Wrong Side Of The Wire” is available for streaming HERE.

God Dethroned comments: “The World Ablaze is our final album in the WWI trilogy. We aimed to create an album that is very dynamic and diverse. It contains typical GD riffing with loads of melodies and catchy hooks. The songs are perfect for our live shows as they contain many mid-tempo parts combined with faster and more brutal parts. Diversity to the max! Dan Swano mixed the album in his typical fashion but without robbing the band of its own identity. Mastering was handled at the Wisseloord Studios where they also mastered albums for bands like Rammstein, among many others, and they put the icing on the cake. The album sounds crystal clear and heavy as fuck at the same time. We are very proud to present this album during our upcoming Serpent Fest album release shows early May!”

GOD DETHRONED was formed by main man Henri Sattler in 1990. After one demo they released their debut album ‘The Christhunt’ in 1992 on a tiny German label. Due to problems with the other band members and the record company, Henri decided to split the band. He then formed Ministry Of Terror, a Thrash Metal band, and released the ‘Fall Of Life’ album with them in 1994. After a European tour Henri left the band and re-formed GOD DETHRONED. With new band members and better songs in his back, Henri and the new GOD DETHRONED recorded ‘The Grand Grimoire’ and inked a deal with Metal Blade. Many successful tours followed in Europe, the U.S. and Japan with great Death and Black Metal acts like Cannibal Corpse, Morbid Angel, Immortal and Marduk, just to name a few.