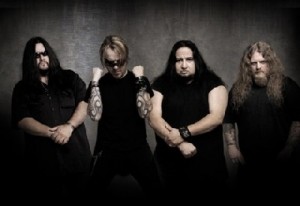 “The Industrialist” is a conceptual album that brings to life a story scripted by vocalist Burton C. Bell. The album’s lyrics detail the plot of the original narrative while delivering Fear Factory’s massive signature sound. Bell reveals, “the album is a futuristic tale of an automaton, striving to survive by fighting for its existence within a desperate world. The lyrics tell the story while the music takes our industrial roots and blends them more perfectly than ever with our metal edge. And all without losing the sound that makes FEAR FACTORY a machine of sonic devastation. FEAR FACTORY fans of any era will not be disappointed.”

Clocking in at just under one hour, the album’s ten songs again unite Bell with guitarist Dino Cazares. It is the second album written by the duo, reuniting in 2009 after a seven year split. Cazares says, “collaborating with Burton again on the new album was like magic. Everything just fell into place naturally. It felt good to recapture the true sound of FEAR FACTORY, taking it back to where it all started while raising it to new levels.”

“The Industrialist” again pairs Fear Factory with long-time friend Rhys Fulber. Their collaborations together include five albums and two remixes, including the certified gold album Obsolete. “Rhys has been our secret member,” shares Cazares. “He is the one producer who has been able to understand what we have been trying to accomplish from the beginning and has opened our eyes to new things without sacrificing our original sound. His talents in production and keyboard/samples has made FEAR FACTORY stand out amongst the many bands of our genre.”

“The Industrialist” follows the 2010 release of “Mechanize.” Widely regarded, the album was the first release from the band in six years and the first new material from the nucleus of Bell and Cazares since 2002. The album debuted on Billboard’s Top 100 album chart week of release and continues to sell in early 2012. Sirus XM/Headbangers Ball’s host Jose Mangin comments, “after Mechanize dominated 2010 as Liquid Metal’s Album Of The Year, North America is chompin’ at the bit to get an ear full of new FEAR FACTORY. I have no doubt that FEAR FACTORY are going to kick our collective asses in 2012.”

Revolver editor Brandon Geist adds, “in the ’90s, FEAR FACTORY’s founding duo of Burton C. Bell and Dino Cazares changed the sound of metal, from the way that metal vocalists sing to the way that metal and electronic music can be fused together. With 2010’s reunion album, Mechanize, their partnership proved to be as lethal as ever. Though 2012 promises plenty of massive heavy-music releases, there isn’t a record that I’m looking forward to more than The Industrialist.”

Fear Factory recently announced the band’s first tour dates since 2011. Joining the group for the tour that is set to kick off on May st1 is Boston’s Shadows Fall, Kansas City-based The Browning, Riverside, California’s The Devastated, and Legacy Of Disorder from New Zealand. The complete list of confirmed dates are: