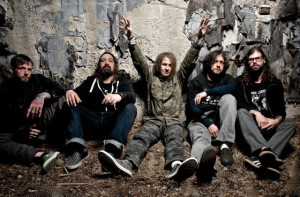 Following a short Winter slumber, the New Orleans ear bleeders in EYEHATEGOD are back to flatten stages this Spring with two separate roadside takeovers. The first round will commence with a headlining tour set to kick off April 13th and run through May 3rd. The near-three week march features support from Fight Amp on select dates as well as special shows with Antiseen (April 15th) and Corrosion Of Conformity (April 16th). The band will take a short pause before heading back to the streets from May 29th through June 6th with hard punk icons Discharge with additional support provided by Toxic Holocaust. See all confirmed dates below.

EYEHATEGOD continues to cause mass hearing damage in support of their self-titled LP which dropped in 2014 via Housecore Records, breaking the band’s decade-and-a-half gap since their prior full-length and marking the most successful release in the band’s twenty-five-year lineage. Having helped define the NOLA sound with their signature down-tuned, blues-inflected guitars awash in furious distortion, underpinning the tormented screams of Mike IX Williams over a thundering rhythm section, EYEHATEGOD reemerged stronger and more determined than ever before. EyeHateGod personifies desperation and addiction in the various backwaters of forgotten America, punctuated by the “N’awlins” sound of rebellion and pollution resulting in triumph over adversity.

Orders for EyeHateGod in North America can be placed via Housecore Records HERE.