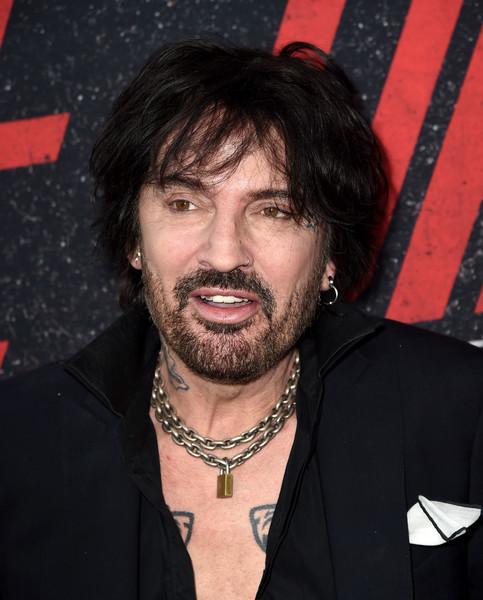 MÖTLEY CRÜE‘s drummer Tommy Lee has been embroiled in one scandalous story after the next as of late, including fake playing his drums during one of The Stadium Tour concerts, along with demanding female fans “flash their tits’ repeatedly during the Crue’s set, and then next exposing his penis via a lewd photo on all of his social media pages. A shocking new interview of a former nude model named Suzi Hoppe who the drummer once hung out with during the early 80s has revealed the most shocking story yet that seems to implicate Lee in the potential drugging and attempted rape of a woman that Lee’s one time groupie pal claimed to have brought along to hang out and party with the famous rock drummer.

In a new interview with FullIinBloom site, Hoppe talks about her days in Los Angeles hanging out at the Troubadour meeting Rob Halford, David Lee Roth, and dating the Crue’s drummer Tommy Lee as well as W.A.S.P. members Blackie Lawless and Chris Holmes. Check out her interview via YouTube down below.

An excerpt from the discussion, includes Hoppe’s account of the purported drugging incident:

“There was one night that me and a girlfriend of mine, from Camarillo, we were going to go out with Tommy Lee and a friend of his. He was probably like a bodyguard friend. I think we went to the Troubadour and then we went to somebody’s house, and I don’t know what happened. But something crazy happened, and my girlfriend started acting kind of weird. Tommy was upset. Tommy ended up punching a brick wall. It was really crazy. My girlfriend took off, and we couldn’t find her.”

“This ended my relationship with her. I don’t know what happened, I think she may have been drugged or something…”

“Something bad definitely happened to her…”

While Hoppe goes on to state that she didn’t think Tommy Lee was involved, a fan named Teresa Eckhardt left a comment in response to Hoppe’s story, suggesting Hoppe is trying to cover up Lee’s crimes:

“LADY, IF YOU WERE NOT THERE IN THEIR PRESENCE, THEN YOU HAVE ZERO CLUE WHO SAID OR DID WHAT…YOU CANNOT SAY YOU ARE CERTAIN IT WASN’T TOMMY OR ANYBODY ELSE….YOU SEEM TO BE INCLUDING YOUR MAYBE AND I DONT ACTUALLY KNOWS AS TRUTH AND FACT.. THAT IS SOOOO NOTTT COOL…YOU SOUND FAME HUNGRY…HAVENT YOU EVER HEARD W.A.S.P…THE IDOL..”

Fans will recall another creepy Crue rape story that surfaced around the time of The Dirt movie release, in which fans learned more about a claim that Nikki Sixx brought forth with the glam metal band’s memoir, ‘The Dirt,’ more specifically Sixx’s tale of ‘pretty much‘ raping a woman with the help of his friend Tommy Lee.

“…the woman hitchhiked to get home and the next day she called Sixx to tell him that she’d been raped.”

Sixx went on to retract his statements and the Dirt memoir rape story altogether but listening to Hoppe’s chilling words about her girlfriend running away from Tommy Lee is concerning to say the least.

Is Tommy Lee a serial rapist? Looking more closely at Suzi Hoppe’s “Lee drugging” story the bodyguard with Lee on the night in question is most certainly the Crue’s former limo driver Al Bowman, who also recently exposed the devil worshipping that Lee, Sixx, Neil and Mars were all involved in around 1981/1982, and that he was specifically assigned by the band to hunt for unsuspecting virgin girls that the band could sexually dominate during black magick ritual ceremonies.