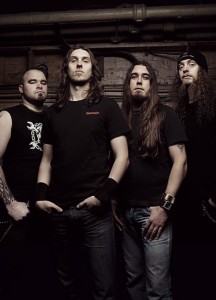 British thrash act EVILE will enter the studio this weekend to begin recording their as-yet untitled fourth full-length album. The band will once again be working with producer Russ Russell at Parlour Studios in Kettering.

Comments EVILE drummer Ben Carter: “EVILE are pleased to announce we’ll be back in the studio this weekend to begin recording our fourth album! We’re also extremely looking forward to be working with producer extraordinaire Russ Russell again, at Parlour Studios in Kettering. The album will be guaranteed to thrash your balls off, make some ears bleed, and some fucking heads bang! We can’t wait to unleash some new material upon you all, and look forward to giving you some new tracks to wreak havok when we embark on the KREATOR U.K. and Ireland shows in April! See you in the pit!!!”

EVILE has also just confirmed two festival shows this summer — Belgium’s SkullFest in June and the U.K.’s Scarfest in August, where EVILE will headline the Ashdown Stage.

Comments EVILE bassist Joel Graham: “We are really excited about being announced for Skullfest!! Belgium is always great for EVILE, and we can’t wait to head over for this festival. The Skullfest bar is also host to some awesome Belgian beers. See ya there!”