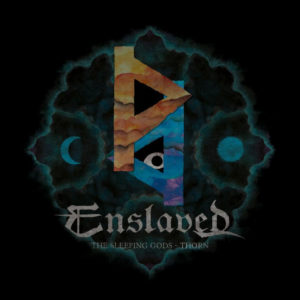 The seven tracks comprising The Sleeping Gods – Thorn originally appeared on extremely limited EPs between ENSLAVED’s Axioma Ethica Odini and Riitiir full-lengths and were recorded both in Solslottet Studio in Bergen, as well as the band members’ own studios and partly in the deep woods of Valevaag on the south western coast of Norway. Like the songs themselves, the production is a mix of old and new; high tech and no-tech – a mix of concepts that have been essential in achieving the signature sound ENSLAVED has become notorious for today. Members Ivar Bjørnson and Grutle Kjellson co-produced the material together with long-time collaborator Iver Sandøy.
The album includes lyrics sung in Norwegian, English, and Old Norse, with themes centered on mythology and the esoteric side of the runes, as well as contrasting the Norse Ways as a polytheistic belief system to the monotheistic plague of the Big World Religions. The music nods respectfully to the wildly varying deities that make up the pantheon of inspiration for ENSLAVED, both “then” and “now.” There are traces of the proto black metal of Bathory, the classic rock and heavy metal of the ’70s and ’80s, the synthesized and sequenced masters of the ’70s, prog-rock, world/Norse folk music, Norwegian black metal of the ’90s, modern classical music, goth rock a la Fields Of The Nephilim, and much more.

Tying he package together are the extensive liner notes Kjellson and a beautiful new layout by Costin Chioreanu of Twilight 13 Media (Roadburn Festival, Opeth, Darkthrone, At The Gates, etc.) whose mesmerizing new illustrations display a unique symbiosis between two of our times’ most exciting visual and sonic artists.

In related ENSLAVED news, this December the band – who are celebrating twenty-five years together – will descent upon New York City for several special performances at Scandinavia House and the Gramercy Theatre in honor of New York By Norse. By Norse was founded by Einar Selvik (Fimbuljod Productions, Wardruna), Ivar Bjørnson (Peersen Production AS, Enslaved, BardSpec), and Simon Füllemann (AISA – All Independent Service Alliance LLC, All Access Agency). New York By Norse marks the second installment of By Norse events – significant international happenings designed to support Norwegian art, music, literature, film, and culture abroad. The Noisey-sponsored gala will find ENSLAVED joined by Norwegian folk collective Wardruna and includes unique art exhibitions, workshops and special showcases spanning over two days
On Friday, December 9th, Scandinavia House welcomes Bjørnson and Selvik for a special evening that will introduce New York audiences to BardSpec, a new project from Bjørnson, and the music of Wardruna, Selvik’s vehicle for showcasing old Norse instruments and musical traditions. BardSpec comprises Ivar, his computer, some keys, a few strings, a pedal or two, a video canon, and sometimes even a trapeze artist. The direction is dark, surprisingly rhythmic, and psychedelically hypnotic. In sound and concept, BardSpec is about minimizing, cutting away, subtracting, and meditating upon the simplest essence of things-the basic elements and building blocks that make up the whole.

On Saturday, December 10th, ENSLAVED will take over the Gramercy Theatre and play two very special sets — one focused on older material, and one highlighting their more recent musical machinations. Attendees can also expect art exhibition from Norwegian motion designer Kim Holm, performances by Selvik and Bjørnson’s project, Skuggsjá (as well as a solo set from Selvik), and a Grimposium panel focusing on ENSLAVED’s history.