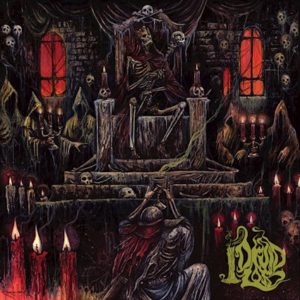 The band’s first record for their new label home, Grotesque Offerings is both a consolidation and intensification of DRUID LORD’s ever-considerable strengths. Eerie and utterly crushing doom/DEATH metal, DRUID LORD soak their molten creations in obscure, horror-inspired lyrics from beyond the grave. Across the 50 mysterious minutes comprising Grotesque Offerings, they evoke the haunts of old from where shadows conjure spells of gloom. DRUID LORD are grounded in the darkest and most underground death metal, of course, but take considerable influence from old horror films, particularly the atmosphere cloaking the classic movies of Lucio Fulci, Mario Bava, Dario Argento, and John Carpenter. It’s a deceptively simple formula, but one that’s done with masterful subtlety and a graven sense of purpose: simply, they LIVE IT, breathing deeply the true, timeless essence of supernatural horror. And that stark simplicity – the leads that linger like fog, the gutted low-end, the stunning sense of dread-inducing melody – is absolutely bewitching within these Grotesque Offerings.

DRUID LORD was formed in the scorching wastelands of Orlando, Florida in 2010 by Pete Slate (Acheron, Equinox) and Tony Blakk (Acheron, Equinox, Diabolic) and original drummer Stephen Spillers (Equinox). Orlando has always been known to be the birthplace of Mantas/Death, and DRUID LORD take pride in that fact. From the beginning, the band’s intent is to create crushing songs that take inspiration from early death metal (Possessed, Necrovore, Autopsy) and the heavy riffing of ’70s and ’80s doom bands like Cirith Ungol, Winter, Candlemass, and Black Sabbath. “I had played for years with my own black/death band Equinox playing fast-type music, but I felt it was time for a change and get back to my roots,” states Slate. “Being that we’re huge old-school horror maniacs, we also wanted to combine that feeling of dread with heavy music.”

DRUID LORD released their debut album, Hymns for the Wicked, in 2010. Second guitarist Ben Ross joined the band right after its release; his sick riffing added to the DRUID LORD style. Since then, the band has put out countless split CDs and 7″ EPs, which have gained them worldwide attention. The band went through some various changes over the course of 2015, but with current drummer Elden Santos, DRUID LORD have found the perfect fit to complement their brand of crushing music.

Now armed with the support of HELLS HEADBANGERS, DRUID LORD are set to spread their supernatural sickness far and wide. Truly, Grotesque Offerings is the record that’s been gestating within the DRUID LORD consciousness since the beginning; now, it has awoken and spreads its leathery wings of doom ‘n’ gloom. Haunted castles, witchcraft, the occult, the living dead, dark folklore, and cryptic stories: no ancient stone is left unturned here. With suitably macabre cover art courtesy of SLAUGHTBBATH’s Daniel Corcuera, Grotesque Offerings is a mini-classic in the making – hark the arrival of the new doom/death lords!