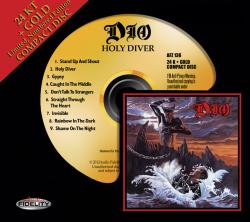 The CD contains a two-page spread copy of the photo-montage LP liner with images from both RAINBOW and BLACK SABBATH days that was included in the original vinyl release.

According to a press release, “Holy Diver is one of the most respected albums in rock and metal and Ronnie James Dio was one of the most talented and respected artists in the world. Leaving Black Sabbath to create a new group built around his formidable singing and unquestionably stellar songwriting, Holy Diver’s stunning quality and consistency owed much to Dio’s carefully chosen bandmates, including powerhouse drummer (and fellow Black Sabbath survivor) Vinny Appice, veteran bassist Jimmy Bain, and a phenomenal find in young Irish guitarist Vivian Campbell, whose tastefully pyrotechnic leads helped make this the definitive Dio lineup. The group entered the studio to record their debut album in early 1983. Produced by Ronnie James Dio, Holy Diver consists of nine original cuts penned by the singer and various band members. Included are such distinctive Dio cuts as ‘Stand Up And Shout’, ‘Straight Through The Heart’, the title track and the concert favorite ‘Rainbow In The Dark’.”