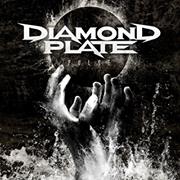 Chicago thrashers DIAMOND PLATE have teamed up with Decibel Magazine.com to unleash “Walking Backwards,” the first track off their new album, “Pulse,” due out August 20th via Century Media Records/Earache Records. For a preview of this upcoming release, “Walking Backwards” can be heard HERE.

Featuring artwork by Gustavo Sazes (Morbid Angel, Sepultura), “Pulse” is Diamond Plate’s second full-length album, and it was once again recorded with producer Neil Kernon (Judas Priest, Nevermore) in the band’s hometown at Studio Chicago. The following press release was also issued about the album:

“While their critically acclaimed debut, Generation Why?, was a strategically orchestrated thrash attack, Pulse was written with an emphasis on creating songs from jamming. This ‘play what thou wilt’ attitude, in addition to 19 year old Matt Ares’ charismatic voice, has enabled the band to cover a much wider range of influences on their sophomore effort that promises to please new and old Diamond Plate fans alike.”