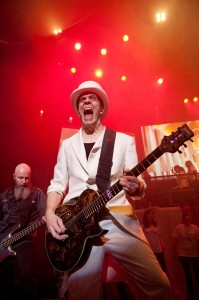 DEVIN TOWNSEND outlined his next few months of activity via his Twitter last night with the following block of tweets:

“So since Epicloud, there’s been lots of activity, tours and projects, Retinal, Casualties etc really a lot to digest for myself and audience I went so hard with dTP that in a way, I began to just put in the time to promote myself. In a sense, you become a parody of yourself So I took some time to finish casualties and get my shit straight. Lots of band discussion, new jamspot, gear, everything overhauled…

And I began writing for z2 about 6 months ago. Between all the ideas, there’s close to 70 songs. Some are really good, but none are ‘it’ How do you not repeat yourself? How do you avoid being a caricature? How do I incorporate Ziltoid with what we’ve done and not just be silly

So life changes start again, acceptance of age has to happen, goals need to be set, discipline and routine. It’s bound to repeat unless… Unless you can instigate REAL change, not just fad stuff, but real change. The scary stuff. Where does it lie? Hmm… I’m proud to say that the ideas that are coming now are beginning to take the shape. The theme. It’s so exciting. We start recording in May

Dunno why I chose to vent like this, but I’m done now. Some great strides taken by band, label, management and us all. It’s going to be rad. Goodnight, and thanks again for allowing us to do this! It’s going to be so much fun guys, just wait! : )) Casualties Of Cool gets released in May by the way… It’s a bridge to the Z2 phase, really important one to me.”