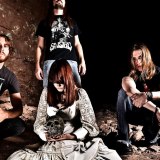 The band commented: “We are very honored to join the Candlelight roster. To be included among such talented artists is very humbling, and we thank the great people at Candlelight for giving us the opportunity.”