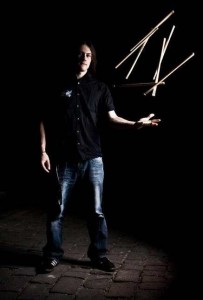 Drummer Kerim “Krimh” Lechner has left Polish extreme metallers DECAPITATED. He explained in a statement, “Too many personal differences and other difficulties made me decide like this.” He added, “I appreciate the good times we had together and what we could achieve in more than two and a half years. Even if our ways are dividing, I wish the band to keep going. However, it’s time for me to move on.”

He continued, “I don’t know what will be next, but I would like to stay in this business. I love to write and play music for you guys. This is my life and this is what I want to continue.”

DECAPITATED’s latest album, “Carnival Is Forever”, sold around 2,100 copies in the United States in its first week of release. The CD landed at position No. 11 on the Top New Artist Albums (Heatseekers) chart, which lists the best-selling albums by new and developing artists, defined as those who have never appeared in the Top 100 of The Billboard 200.

“Carnival Is Forever” was released in North America on July 12, 2011 via Nuclear Blast Records. The CD’s cover art was created by Lukasz Jaszak and can be seen below. The follow-up to 2006’s “Organic Hallucinosis” was recorded at Radio Gdansk Studio in Poland with producer Wacek Kieltyka and engineer Arkadiusz “Malta” Malczewski. Drums were tracked with Daniel Bergstrand (BEHEMOTH, MESHUGGAH, DIMMU BORGIR, KEEP OF KALESSIN, DEFLESHED), who also handled mixing duties.