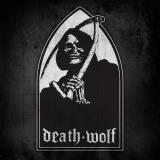 Death Wolf has now announced that second studio album, “II: Black Armoured Death,” will be released on February 18th in Europe and on February 19th in North America via Century Media Records. The label comments on the offering:

“Besides the Danzig-influenced material in the vein of the songs on Death Wolf’s self-titled debut album, fans can also expect ‘II: Black Armoured Deat’h to cover a wide musical spectrum that will surely be worth a listen for every fan of dark sinister punk rock with a metal edge.”

The track listing is:

In addition to “II: Black Armoured Death,” Death Wolf will also be releasing a new 7″ titled “Bloodscent” this month. Featuring different arrangements of two tracks on “II: Black Armoured Death,” this limited 7″ will be hand-numbered and pressed on white wax– and only available at CM Distro and on the road this February/March on Death Wolf’s tour with Marduk, Moonspell, and Inquisition.