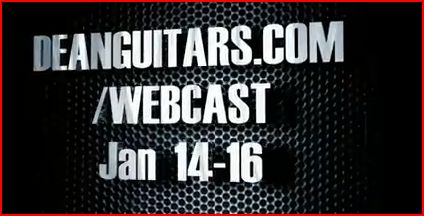 Den Headz, Dean Guitars is the first, and to-date, only NAMM exhibitor to give end-users around the world an all-access ticket to all of the NAMM floor action with their multi-camera, real-time HD webcast. This year is no exception as Dean will unveil it’s top of the line 2011 instruments while presenting an impressive schedule of artist signings, exclusive interviews, instrument spotlights, live contests, giveaways and more.

DON’T MISS DEAN’S NAMM WEBCAST… SAVE THE DATE!!
Over 100,000 viewers tuned in live to see the Dean Guitars “Live from NAMM” Webcast that will once again be hosted by Metal Sanaz and Sirius XM on-air personality Jose Mangin. “Dean Guitars live from NAMM” webcast is powered by NewTek TriCaster.