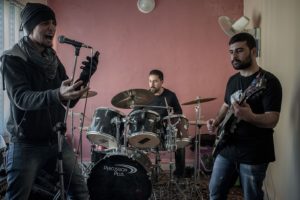 Murad Khalid is a metalhead.

He’s also a Turkmen, an Iraqi and an electrician. But those things are less important to him than fronting DARK PHANTOM, Kirkuk’s premier – read: only – death metal band.

It’s Friday morning and he’s in his bedroom at his mother’s house, playing guitar and smoking cigarettes. The droning sermon from the nearby mosque barely penetrates the room. Inside, it’s a temple to metal. Pages torn from foreign metal magazines paper the panelling – Manowar, Metallica, Megadeth. A skull-shaped ashtray holds a collection of guitar picks. Dark Phantom was recently kicked out of their practice space, so the room is also filled with a drum kit, guitars and amps.

Mahmoud Qasim is on the carpet fixing his snare drum, guitarist Rebeen Hasem is jamming and Sarmad Jalal the bassist is playing with Khalid’s long-haired Persian cat Tiger. Singer Mir Shamal, who drives to practice from the nearby city of Sulaimani, hasn’t arrived yet. Khalid’s bandmates are reflective of Kirkuk’s ethnic mix – Turkmen, Kurdish and Arab – but they all identify as head bangers first and foremost.

They are one of a small number of metal bands in Iraq, a small part itself of the fractured heavy metal scene in the Middle East where bands mostly exist in isolation like this. Religious conservatism, social taboos and repressive governments mean most metal is viewed with suspicion and most bands remain underground.

Regardless, a small but passionate number of young people find an outlet for their frustrations. It’s rare for live shows to materialize, but most fans interact online – even while risking the ire of religious extremists who consider them satanists.

Read more HERE. (This article was originally published in May of 2016)