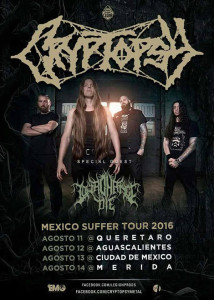 Canada’s CRYPTOPSY have announced their long-awaited return to Mexico.

Their first appearance since 2008, the boys will criss-cross the vast and beautiful Mexican landscape alongside Sweden’s Watain, and fellow death metal veterans Suffocation. Catch the show on these dates: