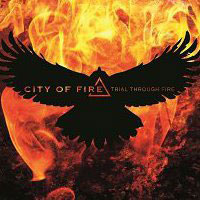 The track, titled “Deliver Me,” features a stomping triplet groove and lush, ambient production. It’s the second track to be released from album number two: the band released “Bad Motivator” through Metal Hammer magazine in January. Bell is currently committed to Fear Factory but the album is expected to be released this fall or winter in the U.S. The album was partially funded by a campaign on Pledge Music.

City of Fire traces its roots back to Caustic Thought, an underground thrash band that at one point included Devin Townsend on guitar. City of Fire’s self-titled 2010 debut album was completed shortly after Fear Factory re-activated with Stroud on bass (although he is no longer with FF). The band has only played a limited number of live dates, including their first international tour supporting Soulfly in Australia in September 2010. Guitarist Ian White was unable to participate in that tour, so his place was temporarily filled by Stroud’s former Strapping Young Lad bandmate Jed Simon on guitar.

“Deliver Me” can be heard at Facebook via this link.