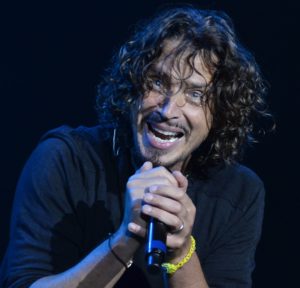 The mystery of Chris Cornell’s death seems to have taken a seriously strange turn now after the medical examiner has completed an autopsy for the deceased 52-year-old rock star. The legendary SOUNDGARDEN frontman died this past Thursday in Detroit after a live performance. He was found slumped on the floor in the bathroom of his hotel room, with visible blood around his mouth.

The cause of death has been determined as hanging by suicide. Although, it is important to
note that a full autopsy report has not yet been completed. 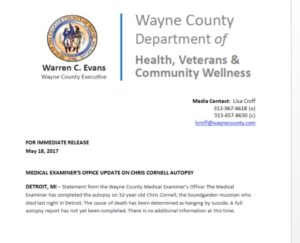 Lisa Croff, a spokeswoman for the Wayne County Medical Examiner’s Office, said Friday that the office would have no new information on Cornell’s death this weekend.

An official says the results of a ‘full autopsy and toxicology tests’ in the death of Cornell could take days before they are completed and released to the public.

A police report says Cornell’s bodyguard gave him two Ativan prescription pills for anxiety after the concert. It was the bodyguard who later found Cornell on the bathroom floor of his room with an exercise band around his neck.

In a statement, Cornell’s wife said the family believes that if he did take his life, “he did not know what he was doing, and that drugs or other substances may have affected his actions.” 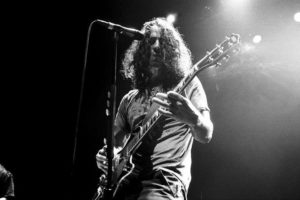 Cornell’s wife, Vicky, does not believe for one second that her husband was suicidal.

Sources who spoke with Chris’ wife Thursday morning confirmed Vicky Cornell spoke with Chris during soundcheck before he took the stage in Detroit and after the show. According to those sources, Vicky says Chris was NOT in any way, shape or form in a suicidal state.

“There were no signs he was at all depressed.”

To the contrary, one concert goer noted of Cornell’s final rock show: “It was clear that something wasn’t right with the 52-year-old during the Fox performance. He often staggered back and forth across the stage, and seemed weak in his movements. Just one or two songs in, it was as if the energy had exited his body, and what was left was a shell of a man scrambling to do his job.”

And his wife did mention that in her final conversation on the phone with Chris after the gig he said that he was “tired”.

Cornell, ‘The nineties Jim Morrison’, has now been elevated to an even greater level of myth in death just like THE DOORS singer who was found dead in a bathtub in Paris, France in 1971.

For the record, Cornell was not just some whacked out druggie for his entire adult life like many want you to believe. Sure, he struggled mightily with drugs and drink, but there are some, including FILTER’s vocalist Richard Patrick who actually credit Chris with helping save their life, thanks in part to his constant show of support while being treated at the same facility himself.

Via his own Twitter profile on the day of his death, Cornell posted a cryptic tweet with the hashtag: #NoMoreBullshit.

What was the exact meaning behind that? Was he done physically & mentally with living life… or was Chris indicating to the world he was not going to tolerate something sinister going on that he knew more about than he should have?

Was Chris Cornell going to help blow the lid off something that ultimately got him killed? 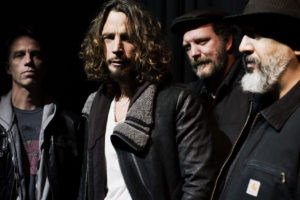 Let’s not forget Chris was a human being who, yes, was a big time rock idol, but he was surrounded by loved ones that cared very much about him and they are simply blown away by his untimely death. To go back a bit more into his personal life, Chris was first married to Susan Silver, who managed Soundgarden and Alice in Chains, in 1990, and they produced a daughter together named Lily; and then the couple split in 2004. Chris is survived by Lily; his present wife, Vicky Cornell, with whom he started a foundation to protect “vulnerable children”; and their two children, Christopher and Toni.

Taking all of this into account, was his death truly a suicide? Or is foul play being covered up and made to look like it was an accident? Some suggest it was Auto-Erotic Asphyxiation, the same way that INXS vocalist Michael Hutchence died or that maybe an overdose of the anti-depressant he took played a crucial role in his demise as his wife thinks that maybe it had some kind of mood altering switch that literally sent him over the edge.

As was with most who die by means of Auto-Erotic Asphyxiation – the body is found with a rope, or a belt around the neck, pants down etc. The police will almost always label such a death as ‘an apparent suicide’. No doubt, it’s simply more acceptable to say someone committed suicide rather than report they have died while pleasuring themselves.

One ‘conspiracy theory’ going around is that Chris might have been murdered for getting too close to the truth behind “Pedogate” and his suicide could have been staged.

After all, two undercover investigators working for Congressman Trey Gowdy, on behalf of the Congressional Committee, have mysteriously gone missing in Arkansas during an investigation into child sex trafficking, according to a report issued recently.

Also, a woman named Monica Petersen was in Haiti working for the Human Trafficking Center and also previously worked for the Colorado Human Trafficking Council’s Data & Research Task Force. She died this year under suspicious circumstances. Her friends on Facebook are looking for answers. Several close friends have made mentions on various FB posts that friends and family have no clear understanding of what happened to Monica except that she died. Earlier this year a FB friend of Monica re-shared a post by Monica where Monica linked to a blog post critical of Hillary Clinton’s dealings in Haiti!! SHE WAS ONTO SOMETHING, very likely between now and then she found out about #PIZZAGATE aka “PedoGate”! The linked post was:

Proceeds from Cornell’s own concert ticket sales were put toward the Chris and Vicky Cornell Foundation. Cornell and his wife Vicky, started the foundation in 2012 in an effort to raise funds and partner with charitable organizations that support children facing problems such as homelessness, poverty, abuse, and neglect. It’s a subject matter that Cornell held very near and dear as explained on the foundation’s website, “Having had personal experience of what it means to be a vulnerable child, Chris is passionate about making a difference to the lives of others.” “I was lucky enough to be in the right place at the right time to make a career doing something I love,” Cornell said. “Not every kid gets those opportunities. I’m in a fortunate position to use music to support important causes that help foster change.”

(From The Cornell’s Site)

The Cornell’s foundation has already given financial support to two Seattle organizations: Childhaven whose trauma program helps heal victims of cruelty and neglect, and YouthCare which works to alleviate youth homelessness. Additionally, the group has been raising money to expand its activities by auctioning collector’s items. In the past, they’ve offered special concert meet-and-greet packages and Cornell’s Harley Davidson customized with the Badmotorfinger logo.

Strangely, the last song Chris sang on the night of his death was “In My Time of Dying / Jesus Gonna Make Up My Dying Bed” by Blind Willie Johnson from 1927. Here are the lyrics:﻿ 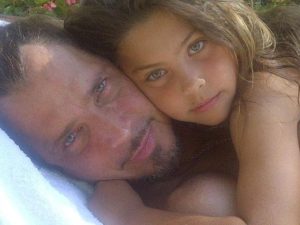