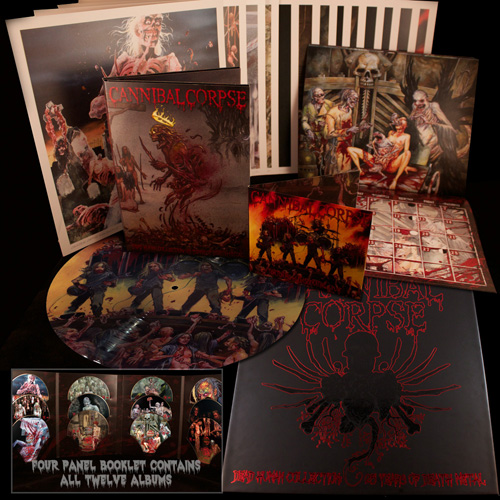 CANNIBAL CORPSE will be releasing a box set to commemorate their 25th anniversary: Dead Human Collection: 25 Years of Death Metal. The box contains: all 12 full length studio albums in a 12 CD foldout case with new artwork, “Torturing and Eviscerating LIVE” on CD and LP Picture Disc recorded in Tampa, FL 2010 / Milwaukee, WI 2012, PLUS: NEW EXCLUSIVE images by VINCE LOCKE, 12″ X 12″ graphic prints of all 13 original album covers, and a 2013 Cannibal Corpse Calendar. The box will be in stores on March 19th and is available for pre-order, along with the previously announced series of Cannibal Corpse picture discs, at http://metalblade.com/cannibalcorpse.

Kicking off in May, this year’s Decibel Magazine Tour gauntlet will last a full week longer than its 2012 counterpart, spanning over 30 North American dates. Presented by Metal Blade, Indiemerchstore.com, Nuclear Blast, Lace Pickups, Century Media and Season of Mist, the 2013 Decibel Magazine Tour will bring together the kind of globally-renowned, boundary-pushing innovators that have made it possible for the magazine to continue thriving for over 100 issues. Coming off a tour noted for Behemoth frontman Nergal’s triumphant return to the States following his battle with leukemia—which culminated in an explosive sold-out closing gig in New York City—Decibel had no choice but to go bigger and even more badass.

“We’re psyched to be headlining this year’s Decibel Magazine Tour along with Immolation and Napalm Death,” says Cannibal Corpse bassist Alex Webster. “This is a lineup of bands that have been a consistent part of the death/grind scene for decades, and we’re proud to be a part of it. It will be a legendary night for extreme music.”

Here’s an early opportunity to score a great deal AND avoid standing in line. Twenty premium packages are available in each market that include your ticket to the show, a tour T-shirt, a tour poster, a super-exclusive “Skip the Line” pass to move you to the front when doors open, one free track, Scourge of Iron, from the forthcoming Cannibal Corpse box set, Dead Human Collection: 25 Years of Death Metal (3/19), and one 10% off coupon for a purchase on IndieMerchStore.com. The price of this package is less than you would spend on a ticket and a tour shirt at the show! More details, including ticket info, will be announced at www.decibelmagazinetour.com.