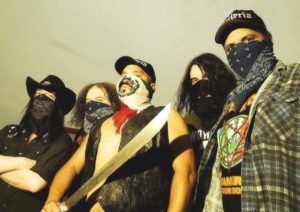 BRUJERIA, the Mexican American supergroup featuring current and former members of Napalm Death, Carcass and Cradle of Filth and led by the enigmatic Juan Brujo, has posted another new song online from their forthcoming album, “Pocho Aztlan.” You can check out the lyric video for the song, “No Aceptan Imitaciones” HERE.

“Pocho Aztlan” will be the band’s fourth studio album and their first since 2000’s, “Brujerizmo.” The record will be released through Nuclear Blast on Mexican Independence Day, September 16th.