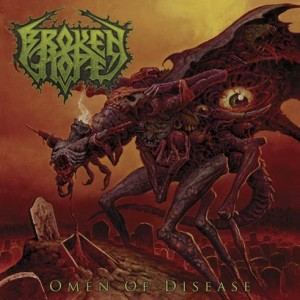 BROKEN HOPE’s Jeremy Wagner comments: “Wes Benscoter is one of my favorite artists, EVER. In my opinion, he’s right up there with Frank Frazetta, Michael Whelan, and Todd Schorr. Ever since Benscoter did our REPULSIVE CONCEPTION and LOATHING album covers, I?ve wanted to work with him again. I was beyond thrilled when Benscoter agreed to take on the OMEN of DISEASE project…and he nailed it! He’s captured the vile essence, putrid vibe, and apocalyptic, disease-laden horror of OMEN of DISEASE. Thank you for creating another masterpiece, Wes Benscoter.”

OMEN of DISEASE was recorded between two studios: drums were exclusively recorded at Belle City Sound in Racine, WI. with engineer Chris Wisco (LAZARUS A.D., JUNGLE ROT, ORIGIN, GORGASM), and the remaining bulk of the album was completed at Mercenary Digital Studios in Zion, IL. with engineer Scott Creekmore (BROKEN HOPE, DIRGE WITHIN, LIVIDITY). OMEN of DISEASE is slated for worldwide release in October via Century Media Records.