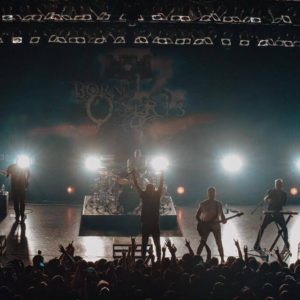 BORN OF OSIRIS are booked to headline a small handful of shows directly before and after their upcoming North American tour dates with Killswitch Engage, Crowbar, and Death Ray Vision. Here are the newly announced dates:

The band’s signature blend of thrash and progressive, melodic death metal came to the attention of Sumerian Records; they signed the band (all of whose members were 18 at the time) and released The New Reign EP in 2007. Pantelis left in 2008 before the recording of 2009’s A Higher Place. That album sold well enough to land inside the Top 100. All Shall Perish guitarist Jason Richardson temporarily joined the band in 2009. He played on 2011’s The Discovery (an album that was cut using seven-string guitars) before being fired later in the year. Produced by the band, it didn’t place as high in the Top 100, but fared better than all previous outings on various indie and metal charts.