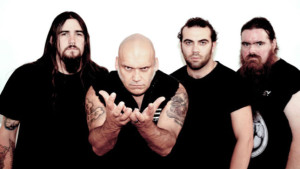 Former Iron Maiden frontman, BLAZE BAYLEY, has announced the first 50 dates in support of the yet-to-be-titled album #8, due in March. Check out the dates below. More to be added soon.

After touring the world for many years and making many highly acclaimed albums, Blaze Bayley has started to create his eighth, and he hopes, his greatest ever studio album. For the first time he wants to offer his fans an insight into the creative part of this process.

Writing this project started in March of 2015. It is an album based on a science fiction story that Blaze is writing. He is still in the early stages of putting together the huge concept for this studio album, so he felt it would be a right time to give his fans the opportunity to get involved.

Fans have the opportunity to opt in on an exclusive membership. As members, they will receive exclusive items and monthly email updates on the new album. These monthly updates will contain information on the development of the artwork, the album and song titles, videos of writing and recording sessions and rehearsals, and interviews with the musicians involved. When the album is released on March 1st, 2016, the members will also receive a printed magazine and a making of DVD. These items will be created by Blaze for the exclusive members to celebrate the journey he has taken with them.