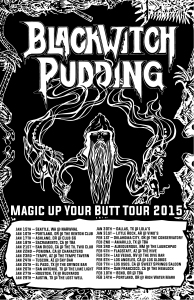 Following the wildly successful release of their new EP, Covered In Pudding Vol. 1, the 600-year-old wizards of BLACKWITCH PUDDING are taking their magic, their smoke, their lazers–and most importantly their riffs–on the road. Starting January 15th, you can catch the traveling wizard doom party extravaganza across the U.S….and a show so entertaining that no other doom metal band in their weight class can muster.

For interviews with the wizards themselves, or for press inquiries about any of the dates listed, please contact Cat Jones at southernxpr@gmail.com.

Haven’t heard Covered In Pudding Vol. 1 yet? Listen to it in its entirety and read about 600 years of wizard adventures AT THIS LOCATION.

Paying Homage to the rotten filth from which they were born, Blackwitch Pudding are actually a band of three wizards. Legend has it they were raised from a stagnant, used puddle of ergot, left by the mysterious Blackwitch no less than 600 years ago. Trained in the dark arts of doom and witchery, these wizards wander the cosmos in search of nothing, for their path is a simple one: The riffs must be heavy and the smoke must be heavier.

The band, their records, their merch, their live shows and the entire experience of Blackwitch Pudding is a self-sustaining, self-produced operation. Great lengths have been taken to ensure that no part of the spectacle that is Blackwitch Pudding has been overlooked. The sights, the sounds, the smells, the lights and the crushing feeling you get in the pit of your stomach travel to every stage, forest, and cabin they play. Hand-crafted by a loyal cadre of dark-art comrades, everything that goes into the Blackwitch Pudding experience is tailored to send the listener, and even more so the concert-goer, into an unforgettable celestial black hole of tongue-in-cheek, stoned-out doom.

It’s been nearly a year and a half since the wizards released their infamous debut LP, Taste the Pudding, and they have grown restless. Though one might question why, after 600 years of conjuring evil riffs, casting spells and wreaking supernatural havoc upon this planet that the trio has only created one full-length record, but the truth is, for centuries, pesky, silly mortals have been ripping them off and making the themes more palatable for straight-laced human consumption. So the robed wizards of doom have resurfaced again with a new EP, Covered In Pudding Vol. 1, to prove once and for all that they were here first, that their riffs shall ring true, and that rock and roll should be about an average wizard’s favorite things: sex, drugs, witch-babes and filth.

“They lay down some of the heaviest, testicle-swingiest, fuzzed-out grooves I’ve had the pleasure of hearing in a long time.”
– Oregon Music News

“It sounds like a party that’s about to get way out of hand — and then the pounding starts, bones begin to splinter, and the splash of viscera begins to paint the walls red. Or at least that’s what I was imagining while I banged my head ’til the vertebrae began to disjoint.”
– NO CLEAN SINGING