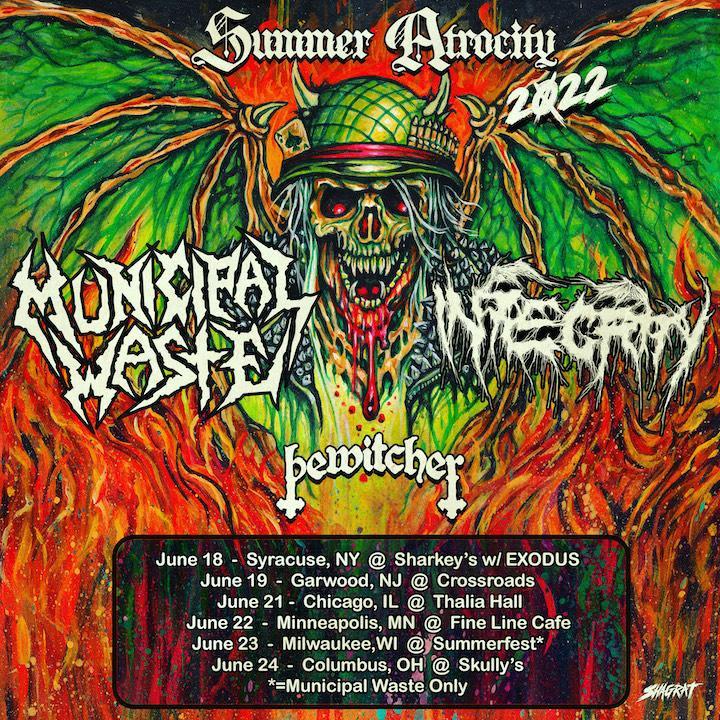 BEWITCHER announces an iron-grip of tour dates. The band will be hitting the road this summer beginning with a headline show in Cleveland, OH on June 17th and wrapping up on September 17th in Mexico City. Along the way, they will be sharing the stage with Municipal Waste and Integrity for the Summer Atrocity Tour, co-headlining with Cloak on the Poisonous Pandemonium Tour, and finally joining Goatwhore and Incantation on the Vile Ascension Tour, with a few headline shows and festival dates sprinkled in between.

“That old dusty road is calling again. The first leg of the ‘Rebel Angels…Tour’ this spring was just the warm-up, and this summer, we’re turning up the heat!  We are extremely stoked to be out there with our friends in Municipal Waste, Cloak, Goatwhore and all these other heavy hitters! We have some killer festival appearances and then end the summer with our first ever show in Mexico City. Total metal overkill! Basically, if you’re in the U.S. and have ever wanted to see Bewitcher live, the year 2022 is probably the best chance you’ve ever had. So don’t fuck up and miss out, we’ll see you out there!”

Formed in 2013 as a duo, M. Von BEWITCHER and A. Magus pumped out a handful of BEWITCHER demo tapes that stormed the underground with blasphemous and raw speed metal. In 2016, after rounding things out with a live drummer, BEWITCHER released their self-titled full length debut (recorded and mixed by Joel Grind), and followed it with Under The Witching Cross in 2019. No strangers to the road, BEWITCHER has toured hard all across North America and Europe supporting such acts as Visigoth, Savage Master, and Holy Grail. BEWITCHER is M. von Bewitcher (vocals, guitars), A. Magus (bass guitar, backing vocals), and A. Hunter (drums, percussion).