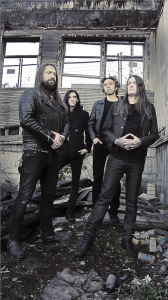 The towering new hymn comes by way of the band’s third full-length and first under the Relapse Record banner, An Unending Pathway. Recorded at Type Foundry in Portland, Oregon, produced by Billy Anderson (Sleep, Eyehategod, Melvins et al) and the band, engine-eared and mixed by Anderson at Everything Hz, also in Portland, and mastered by Brad Boatright (Sleep, Beastmilk, Nails) at Audiosiege, on An Unending Pathway, ATRIARCH delivers catharsis through sonic ritual, churning an otherworldly fusion of death rock, doom, black metal, post punk and psychedelic drone/noise, their haunting atmospheres and avalanches of chest-heaving sludge at once compelling and overwhelming. Imagine Bauhaus as interpreted by Eyehategod, or Sisters of Mercy filtered through Neurosis, and only then can you begin to grasp the darkness that is ATRIARCH.

Relays Cvlt Nation of the offering: “An Unending Pathway, is an arresting and welcome combination of doom metal, death rock, black metal, and Mid Eastern-influenced darkwave sounds…. this LP is a well-produced and masterful synthesis of its differing components. It sounds confident and assured, a definite step forward in ATRIARCH’s sonic progression… it’s ATRIARCH’s best and most cohesive-sounding LP to date… singer Lenny Smith’s deadpan, chanting-like vocals rise to the fore, echoing as if sung from the depths of a musty Egyptian tomb. Tribal-type drumming underscores the building intensity, and halfway through the track the band switches gears and Smith begins to sound like Rozz Williams, with the band picking up speed and fury around him.”

Feel the cold audio decay of “Allfather” now playing at Cvlt Nation at THIS LOCATION.

In related ATRIARCH news, the band will bring their ceremonials to the stage this November on a West Coast run of live dates. Scheduled to kick off November 7th in Seattle, the band will traumatize thirteen cities through November 21st. See confirmed shows below.

An Unending Pathway will be released via Relapse Records on October 28th, 2014.