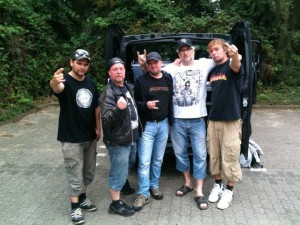 “One thing I do know – I have been given the opportunity to join the most hard-hitting legendary thrash metal band of all time out of Denmark, which means, I’m going to go out and be the most frantic and hard singing vocalist I can be! And, following the renowned singers prior to me in Artillerys history, it’s both a daunting and exciting challenge! I can’t freakin’ wait to go out and give it 100% together with the guys in Artillery!”

The band goes on to state the following:

“Michael sings and performs with a lot of attitude and really likes the Artillery thrashing style. He will contribute with his own style, but he can sing the classic Artillery songs very close to the original singer and also deliver the hard hitting vocals like Søren did! Just listen to the classic song ‘The Almighty’ with Michael Bastholm Dahl on vocals, the first song he ever did with Artillery. The song is recorded at Medley studio with producer Søren Andersen.”

Artillery have already started to work on new songs and will be recording in the studio in February 2013. The following dates will be a chance to see the new Artillery line-up, which also features drummer Josua Madsen alongside long time bass player Peter Thorslund and founding members Morten and Michael Stützer on guitars.

Listen to “The Almighty” with new vocalist Michael at the helm below. Also, here are the live dates that Artillery has posted: