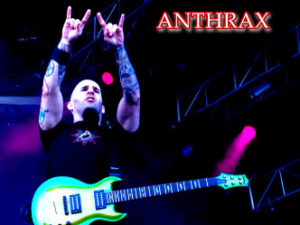 According to the Facebook page of the In Flames-curated Borgholm Brinner festival, ANTHRAX has pulled the plug on plans to tour Europe this summer “due to scheduling conflicts”. The band was one of several acts scheduled to perform at the festival on July 27-28 at Borgholm Castle, Sweden.

Tells Anthrax in a statement, that they “sincerely apologize to all of their fans and hope to see them very soon.”

Nearly as much as Metallica or Megadeth, Anthrax were responsible for the emergence of speed and thrash metal. Combining the speed and fury of hardcore punk with the prominent guitars and vocals of heavy metal, they helped create a new subgenre of heavy metal on their early albums. Original guitarists Scott Ian and Dan Spitz were a formidable pair, spitting out lightning-fast riffs and solos that never seemed masturbatory. Unlike Metallica or Megadeth, they had the good sense to temper their often serious music with a healthy dose of humor and realism. After their first album, Fistful of Metal, singer Joey Belladonna and bassist Frank Bello joined the lineup. Belladonna helped take the band farther away from conventional metal clichés, and over the next five albums (with the exception of 1988’s State of Euphoria, where the band sounded like it was in a creative straitjacket), Anthrax arguably became the leaders of speed metal. As the ’80s became the ’90s, they also began to increase their experiments with hip-hop, culminating in a tour with Public Enemy in 1991 and a joint re-recording of PE’s classic “Bring the Noise.”