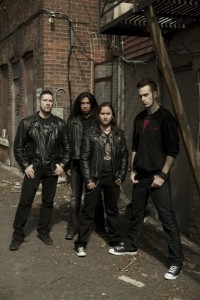 ANNIHILATOR founder/frontman Jeff Waters has checked in with a post-European tour update:

“After one hell of a successful and fun tour and new CD release, discussions are going on right now for Round 2 of the Annihilator – Europe In The Blood Tour. Nothing confirmed and we are still getting more and more offers coming in, but yes, we will likely be back to Russia, Denmark, Germany and many others that we missed in Europe on this recent run that covered three months. We will let you know when but it will likely be early 2016 Thanks to all of you who came out so far and we are working hard to bring this metal madness to everywhere else!

We might also be looking for a good metal support band. Our last tour had some pretty kick-ass bands: Harlott and Archer. This time, we would bring only one support (so we can play a longer set). Interested bands can contact management with a link to a video/info of the band at annihilator@me.com.”

Waters took the time to sit down with Hughes & Kettner before their gig at Luxembourg’s den Atelier venue to discuss everything from touring the world with his GrandMeister 36, to his favourite guitar amp recording techniques, plans for Annihilator album number 16, and a whole lot more.